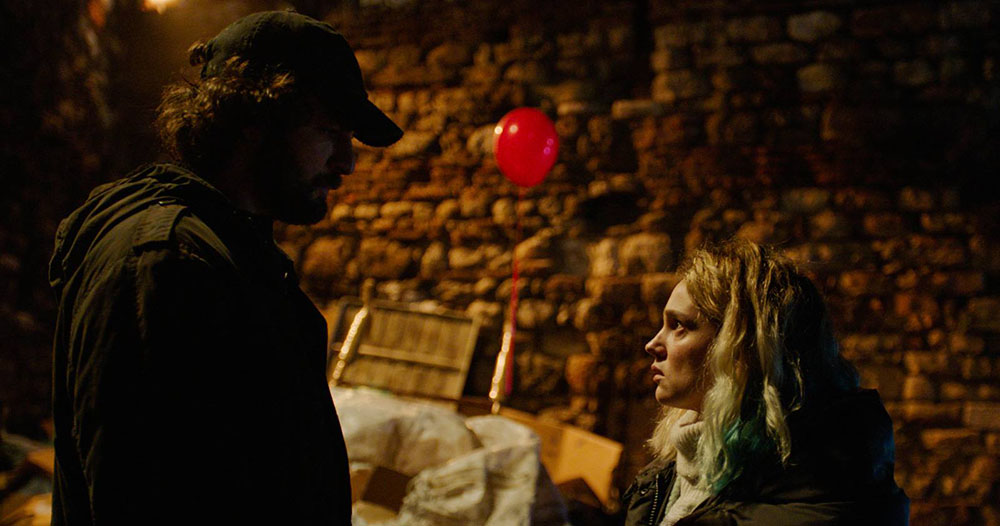 Spoilers from Episode 24 are included in the following discussion.

What makes love end? For Inci, it is the disguise*, the inability of the person she loves to be open with her about his flaws and defects. She tells Esra that she can only love someone unconditionally if he shares his truths, no matter how ugly they are, with her. And so, in the final scene of the episode, Han allows her to follow him to the garbage dump, to see him change from his suit into a workman’s jumpsuit, and to walk towards a large garbage bin, where he emerges from the shadows to welcome her to his ‘home’.

There have been many moments in this series where Han has been creepy, but the scenes from this episode showcased him in the most terrifying light: when he took a step forward to slowly caress Inci’s face, when he silently stared at her sleeping form, when he tied a red balloon on the garbage cart - it was all deeply unnerving. Despite seeing Han on our screens for 24 weeks, we have yet to fully understand his malady, as much of his behaviors are still shrouded in darkness. His unhealthy affinity for trash is clear, but what else does he collect when he roams the streets at night, sorting other people’s filth? Also, the idea of a man spending the wee hours of the night in a garbage dump talking to mannequins, but being pristine and polished the following day for work is troubling; the fact that he does this as an almost daily habit or routine is concerning on an entirely different level. Haluk Bey’s perception that Han is a sadist is, as most of his insight, likely wrong, but there is a fearlessness in Han that allows him to threaten and control people, so effectively. Even with Inci, despite being terrified of him and all that he has hidden from her, she still remained beside him, allowing his touch.

The most surprising part of this episode was the way in which Inci handled her newfound knowledge of Han. I expected her to confront him directly; instead, she kept him guessing as to what she knew, and how much she knew, until the end of the episode. Her indirect approach was probably the best way to reach him as she has tried to talk to him directly, about his issues, such as his anger, multiple times, but he always seems to have a ready response that avoids the truth. And, he tends to skillfully turn the conversation against her, by using her family or past in a poor light.

All of their scenes this episode were charged with suspense and attraction; theirs is a multi-dimensional pairing with a lot of shades, but the feature of their relationship that is the most fascinating is how, despite being married, both Han and Inci continue to test and assess one another, and strategize about how best to read and communicate with the other person. They are still learning about each other, which is perhaps the most realistic part of their relationship; she loves him and he loves her, but those declarations and feelings don’t, by themselves, allow them to understand each other, as anyone who has been married or engaged in a relationship or witnessed a relationship can attest: there is so much learning that happens after you ‘fall in love’ that some might say the initial declaration is only the beginning, not the final point in the story.

I expect the next few episodes will be the trickiest for Inci, as she not only has to confront his ‘other’ side, but she also has to discern whether she can still stand beside him, as she had boldly declared that she would, when she wanted to learn about all of his ‘flaws’. The most confounding thing about matters of the heart is that often the unexpected happens: what we believe to be infinite, may in fact, be quite finite and what we conceive to be a gateway, may in fact, be a boundary.

When he first saw her at the restaurant in Episode 3, he felt a strong attachment to her. He sang for her and tried to ‘woo’ her as best he could, but she remained aloof and disinterested. However, as she became more distraught over her relationship with Cuneyt, she allowed him to become her friend with the potential for something more. He, understanding the full extent of her situation, agreed to her terms: to give her space, to be her friend, to teach her to drive a car, and to be kind to her. Where did that Esat go? While a romantic pairing between these two didn’t make sense from the get-go, the way in which he yelled at her for being selfish and rude was uncalled for. Han’s words about Gulben and Esra’s complaint to the police only added fuel to the fire that was raging inside of him as he was angry at being rejected by Esra, upset that she was still ‘seeing’ Cuneyt, and conveniently used her complaint to hurt her at the first opportunity. It was an ugly scene, and frustratingly upsetting because Esat should know better than to conflate his pain at being rejected by her into anger for her entirely reasonable action against her landlord.

And, in regards to Inci’s treatment of Esra? Esra may not be a perfect friend, but she not only moved apartments to console Inci, she also didn’t punish Gulben for among other things, pushing her into a glass wall and almost killing her, to protect Inci’s relationship with her in-laws. That is above and beyond the call of friendship. Did Inci need to berate her for filing a complaint? Absolutely not. But, I’m glad that this scene was included because as much as Inci is the protagonist of this story, and the ‘heroine’ that we are rooting for, she also has some 'flaws', one of which is her selfishness. If she is struggling with Han, Esra is not to support him, but if she is happy with Han, then Esra is to be happy with him as well. This is quite normal for friendships, as you seek to cheer your friend when she is happy, and cry with her when she is blue, but the trouble arises when the trajectory of highs and lows are only marked by one person’s life events; it should be a two-way street. Inci should try to understand Esra’s perspective too.

It is admirable that Esra consistently forgives and supports Inci, despite all of the hurtful things she has done and said. Maybe there is hope for her and Cuneyt, yet?

One of the most surprising parts of Safiye’s character is that there is a part of her that can sometimes consciously acknowledge that her behaviors and actions are abnormal or improper. She tells Naci that she used to think her mother’s habit of packaging items in black bags was ridiculous, but after Hasibe had a stroke, she began to follow suit. She explained to him that those black bags are memories; she plans to go through all of their stuff and clean it, one day, so it can be useful once more.

Naci patiently listened to her explanation without judgment or censure; he only looked at her with love, and gifted her with a white dove embossed hair clip. Honoring his request to wear it immediately, she gently unties her hair, fastening only half of her loose waves in his clip, and placing her mother’s dated accessories on the table. In contrast to the extraordinary patience he usually exhibits around her, as soon as Safiye placed Hasibe’s items on the table, Naci swiftly grabbed them and threw them into the trash. She floundered in disbelief for a moment, but then grudgingly accepted his actions, and even followed his direction a few moments later by throwing away the gift box that he had given to her. At least for that moment, she believed him when he told her that: memories are best stored in the heart and mind.

She believed he would leave her when he discovered their plan to put all of the black bags back into the apartment suite, dressed in their “pandemic” attire, but he couldn’t fathom being disgusted by her or her actions. This type of story line could have seemed cheesy or over-the-top in another dizi, but Naci’s character has been sketched so thoughtfully, and Deniz Tansel Ongel has translated him with such intelligence and grace, that his consistent support of and for Safiye is entirely believable. So often, when we analyze a dizi, we review the screenplay in one light and the actors/actresses in another, mindfully separating the two to enable to us to support the actors/actresses we love, without necessarily sanctioning all of the character’s statements and decisions, which can sometimes feel mismatched or “out of character”. That we have not had to do this with Naci’s character or Ongel’s performance is worth noting, as his portrayal of Naci, together with his character’s statements and actions are perfectly matched; this has resulted in, to put it simply: cinematic brilliance.

They hoard all of their things in the suite upstairs, while I contain it all under my skin, she painfully tells Ege. This was perhaps the most insightful explanation of why she resorts to harming herself by scratching her skin raw. There is so much that she has seen and heard, without fully understanding the why of it, as her mother died so soon after she was born, that she can’t express all that she has bottled up inside of her. Gamze’s questionable friendship with her is opening her up in a way, forcing her to engage with herself anew, perhaps finding that she can be defined by more than just homework and obedience. She even stood up to Safiye instead of cowering in fear.

The confrontation scene between Gulben and Safiye on the one hand and Gazme, Neriman, Emre and Ege on the other, on the terrace at night deserves accolades as it was equal parts awkward, comical and humiliating. It was one of those scenes where you want to look away because of second-hand embarrassment for Neriman, but you continue to curiously watch how the events unfold.

I’ve made a joke and now, you have too, so we are even, she tells him, with only her head peaking out from behind the door, to hide her mother's wedding dress. But, he insists that he was not kidding; he does want to meet her for cay at the tea garden. Their budding friendship is wonderfully funny and heartwarming to watch. I am officially rooting for this pairing, but I hope that Gulben gets to play a more active role in her story; perhaps, she may find a reason to be outside of the home more often? It would be fun to see her interact with more people. She has so much more to offer.

*“Disguise of every sort is my abhorrence.” - Jane Austen’s Mr. Darcy, Pride and Prejudice