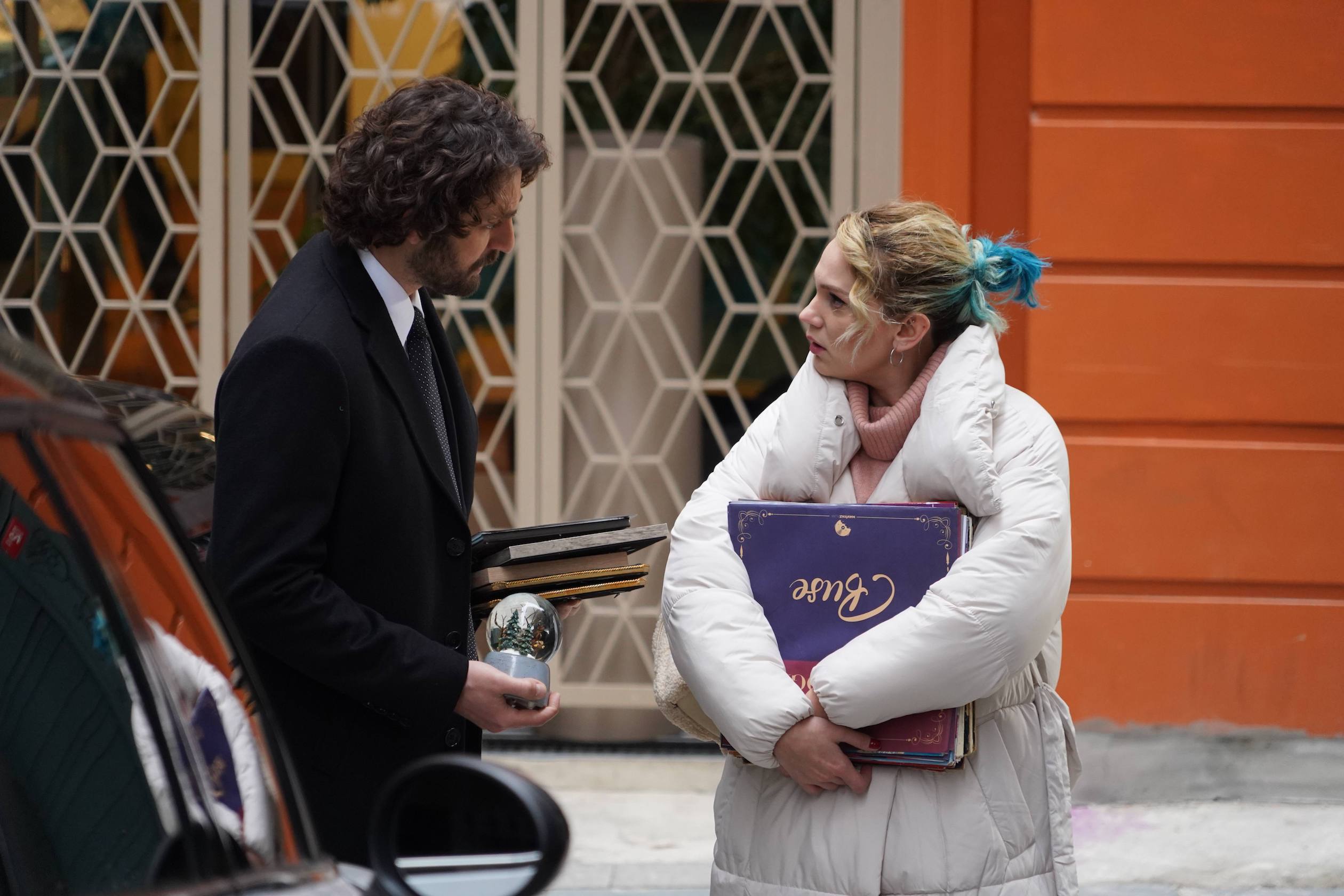 Spoilers from Episode 16 of Masumlar Apartmani are included in the following discussion.

“If you leave one day, will you bring yourself back too?”

When she had gently posed this question to him, so many years ago, he couldn’t imagine ever leaving her side. But life, and Hasibe’s malicious ploys to keep Safiye bound to her forever, forced him to go. Though it has taken decades for him to return, and for her to ask him to stay, Naci and Safiye finally meet for their long-overdue date. The easy smiles and hopeful promises that were a hallmark of their youth are now replaced by anxious silences, thoughtful questions, and respectful distances. Curious to ‘learn’ one another once again, Safiye tries to ask Naci about his divorce, but he hesitates to discuss it, wanting to focus only on her, and on what they once were. They were masum in their love, untainted by bitter prejudice and the competing obligations of adulthood. He was astonished to learn that she has never loved another, after him. So often, the anticipation of a reunion between two characters outweighs the actual exchange; however, for these two, not only was the build up to their meeting exhilarating - watching Safiye carefully dress and adorn herself for the Naci that she could not let herself forget - but the actual exchange was gratifying. He longed to hold her hand, and she found herself gulping her cay to calm her nerves.

Present day Naci is a far cry from his young self as anguish and despair have replaced the happy child that he once was. His relationship with his daughter underscores his pain, as he is torn between wanting to stay beside her, and knowing that if he does, his feelings of emptiness will suffocate him once more. It is a cruel trajectory to have experienced the sweetness of love in youth, only to have it snatched away so soon thereafter; and having never found anything to match or almost match those feelings, Naci felt himself slipping away, even from his daughter. So, although the entrance of his child makes this story a bit ‘messy’, I can’t fault him too heavily for leaving his family to search for himself once again. He is still very much a broken man. And though there is a long road ahead for him to find ‘happy’, when his gaze rests on Safiye, there is a twinkle in his eyes that is reminiscent of the joyful young man that he was.

Safiye courageously remains steadfast to herself, refusing to let her mother’s words infect her thoughts. By asking Naci to stay, not only with a beautiful sign of hope, but also in a concisely written, heartfelt gitme, Safiye took a huge step forward. She renewed a long severed connection with her young self and in doing so, changed the entire atmosphere in her home, bringing back the teasing, laughter and smiles that have long been missed in the Derenoglu household; there were many moments in this episode that felt like a gift.

With the return of Haluk Bey, Inci relives some of the most painful experiences in her childhood, including a car collision that may have caused her mother’s death. She vehemently refuses to live in the same house as her father, and even tries to remove all photos and remembrances of her mother, before leaving the house. Overwhelmed by these memories, she asks Han to take her away, and they escape to the sea side and to the terrace. Their ‘stolen moments’ together help Han realize how much he wants to live with her always, not just because of her father’s return. He asks that they finally tell their families that they have actually been married for some time. Although some of the focus of this dizi in the past few episodes has shifted away from their relationship, the attraction, affection, and laughter that characterized their initial interactions are still ever present. There’s is by no means a perfect relationship or a balm that will soothe away all of their individual sorrows, but it is very real, and exquisitely translates the authenticity of genuine human connection, with all its good, bad, and shades of grey.

A plot point that I would like to have explained more in future episodes is why Inci’s mom initially fell in love with Haluk Bey. This is a key issue that is unresolved at present as Haluk Bey has not been shown to have any redeeming qualities: he is sloppy, drunk, and selfish, when he is not abusive, manipulative and greedy. There has to be a reason why Inci’s mom sought him out in the first place. On the other hand, perhaps her mom’s affection for him was more indicative of her own problematic notions of love that she developed based on her childhood? It is difficult to determine how far back to peel the onion in this show.

Not as Maria or Rapunzel, but as herself, Gulben was finally featured in her own dream. This is the progress we were hoping to see! Though she is still fearful of the black baggage that threatens to ruin their happy days ahead, Gulben was overjoyed at the prospect of a relationship between Safiye and Naci. So much so that she prevents Safiye from seeing Gulru in Naci’s room and tells him to meet with his friends outside of his suite to prevent Safiye from being upset. It was heartwarming to see this Gulben, who is trying to take charge of her life, finally realizing that dreaming of a husband is not the only vision that she can have. There are so many other fulfilling ideas that she can ponder on.

Neriman wonders why Ege doesn’t like Gamze, when everyone else seems to love her, and her beauty. Ege tells her that Gamze may be pretty, but that beauty fades when she speaks. Neriman is oblivious regarding who Ege has actually fallen in love with, but their friendship is slowly transforming her: she stops harming herself when he stands up to Gamze and Emre in defense of her, and she accepts his gift of lotion, which helps soothe the pain of Gamze’s remarks about her skin. Perhaps, in time, Neriman will be able to stand up for herself with the same vigor with which she told Ege that he was acting like a ‘gorilla’ when he fought with Emre.

The exchange between Safiye and Tomis was very revealing because it provided a broader lens with which to view a key part of this story, namely how mothers, who are unloved, treat or rather mistreat, their children. Having been that child, who was ill-treated by Hasibe because Hikmet Bey could not forget his first wife, she may reconsider her decision to 'continue seeing Naci' after she learns that Tomis is his child. It will be a tricky dynamic to explore, and one that I am very much looking forward to watching play out. Gulben’s dream sequence, featuring Naci and Safiye’s wedding, was beautiful - a truly enchanting and hopeful vision with which to conclude the episodes of this year.