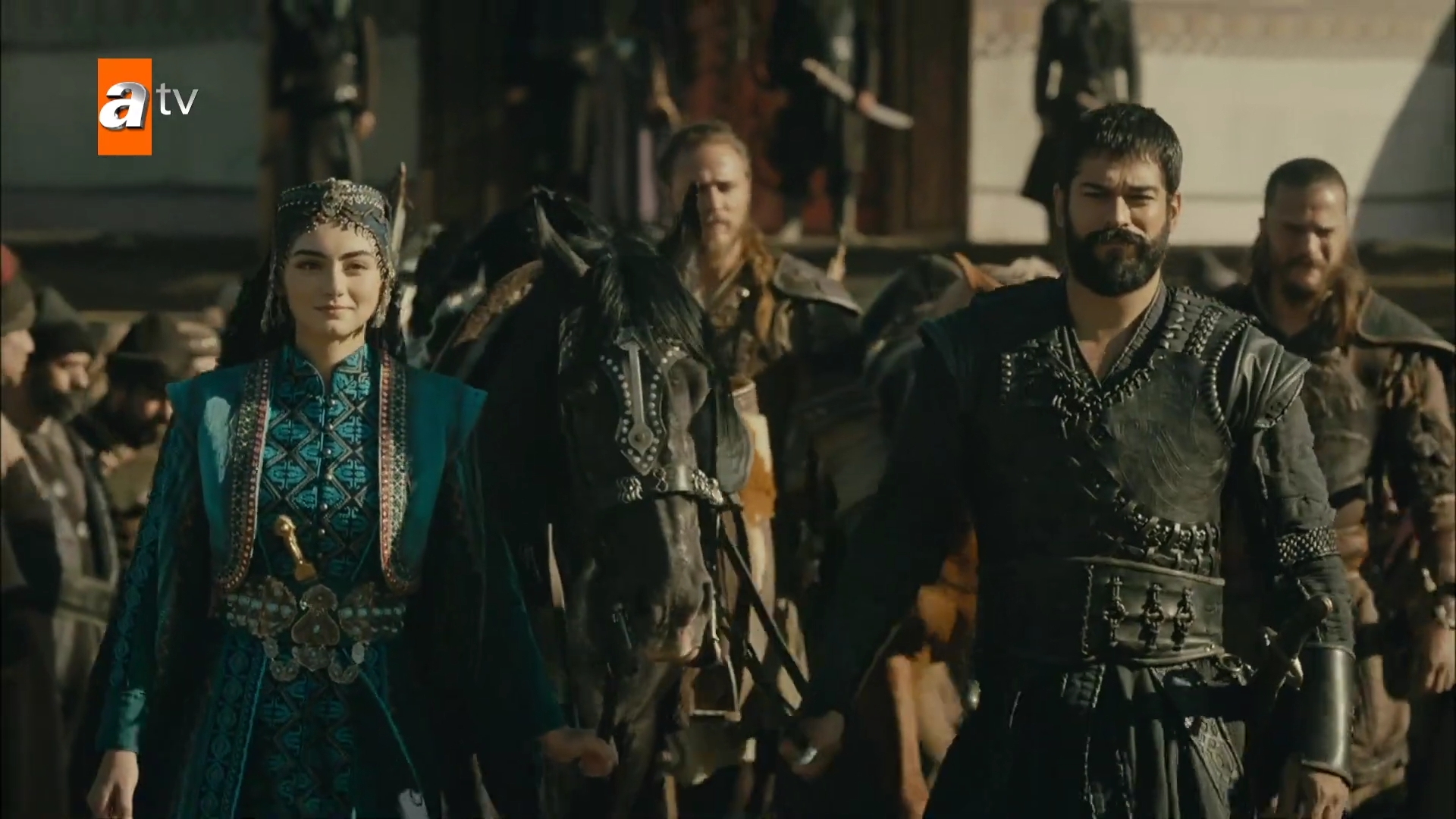 Whenever you see someone with the crown of victory, you should know that he has suffered a lot for it.

Who actually thought that Osman would walk into that castle and surrender himself to that vile Tekfur Nikola!? Obviously not a single soul! While the entire castle was pre-informed about Osman arrival and had taken precautions too. They couldn't lay a finger on him. He sneaked it with just two alps, nearly killed Nikola and flew off without his single hair being harmed. I won't lie, I have never witnessed such a master plan. And the cherry on top of the cake was Aygül! That lady I must say has turned into this wounded but recovered lioness. Selcan Hatun trained her like no one could train an alp! She followed Osman, without his permission got involved in the plan, knocked some enemies down, shed blood, took an arrow for Osman like she had nothing to lose. And yet said that we wish to be an alp and walk the road of shahada. I couldn't help but fangirl over her throughout her screen time.

Mağlesef, Nikola didn't die and Osman is aware that his dagger didn't reach deep enough to kill him. Now he thinks he's reborn like some Pheonix. Swears to take revenge but as we move ahead of the episode Nikola couldn't succeed in it utterly. He does play Dündar bey and Savci dirty by first trapping them and then covering their faces with sculpting clay and wool patches and then trying to execute them in the middle of Kuluchaisar. Also, his plan for engaging Dündar bey, Yavlak Arsalan and Savci bey in a peace treaty while he burns Soğut down is well executed.

Darkness is illuminated with the fire in your eyes. All my sadness vanish with your smile, Bala.

The very beginning of the bölüm. You just couldn't take your eyes off the screen because you're afraid you'll miss out on something this crucial and exciting. The entire scene where Osman is in the Kuluchaisar and fights against a well-prepared army and the way he escapes with Göktuğ, Boran and Aygül is mesmerizing. And to make the scene much more exciting is Aygül fighting as Gazi! The way women empowerment is displayed so beautifully In this show leaves me awestruck. Aygül broke all the barriers of the stereotypes that women back in those days used to handle the tribe while their beys' fought wars in faraway lands. Even after having an infant, even after all the hurdles life shoved her way she changed from an all in love tribe girl to someone who wishes to be an alp. These minor details create a massive impact on the audience. The fact that the show is aware of this and uses it most appropriately is just amazing!

We not only get to see the warrior side of Osman but also the loving and soft side. We have to accept that if Osman hadn't gotten involved in the Dündar bey and Aygül issue himself, Hazal Hatun would have dissolved some of her venom in Dündar bey's heart towards Aygül. Osman calmly took the baby in his arms, kissed and inhaled his scent and then right in front of the tribe announced the child's name and him being the grandson of Dündar bey and son of Aygül. He didn't mention the child's father's name because according to him children are not from their fathers but from Allah. He simply does what others cannot. While he was creating a good environment around the baby and dissolving the tension between Aygül and Dündar bey, he did something which made Savci bey and Gündüz Bey embarrassed because such a thing couldn't have come from them.

I really liked how Osman was one step ahead and saved Soğut. His planning in such a short period of time was incredible. He saved Soğut right in time without causing any type of trouble to the citizens. Just like Abdurrahman Gazi told Ertuğrul bey, Osman is a replica of young Ertuğrul Bey. Without causing any tension or any sort of chaos, he saved the city. The civilians were not even aware of the attack nor did he let them know. Flatyus was in his misconception that he'll burn down Soğut with his flying fire until the last moment when he sees Osman as the blacksmith. Clearing up a mess without creating chaos is not everyone's cup of tea.

Concludingly, the episode was a thriller one. Giving us chills down the spine. The excitement level was again well maintained. Got us emotional too while watching the father-daughter reunion. Though there are certain parts that need to progress in the plot and yet are at a halt. This time I'm looking forward to what Savci bey will do both in Aygül's and Osman's matter. Though realization has hit Dündar bey and Savci bey on their death bed that Osman has proved himself precise again. Lena was used by Hazal brutally which Lena needs to realize now. Though things were easier for Osman because Targun couldn't coordinate with Nikola this time, since she decides to save herself from being caught by Bala. But will it be the same again? Guess we'll find out in the next episode which we're waiting for anticipatedly.