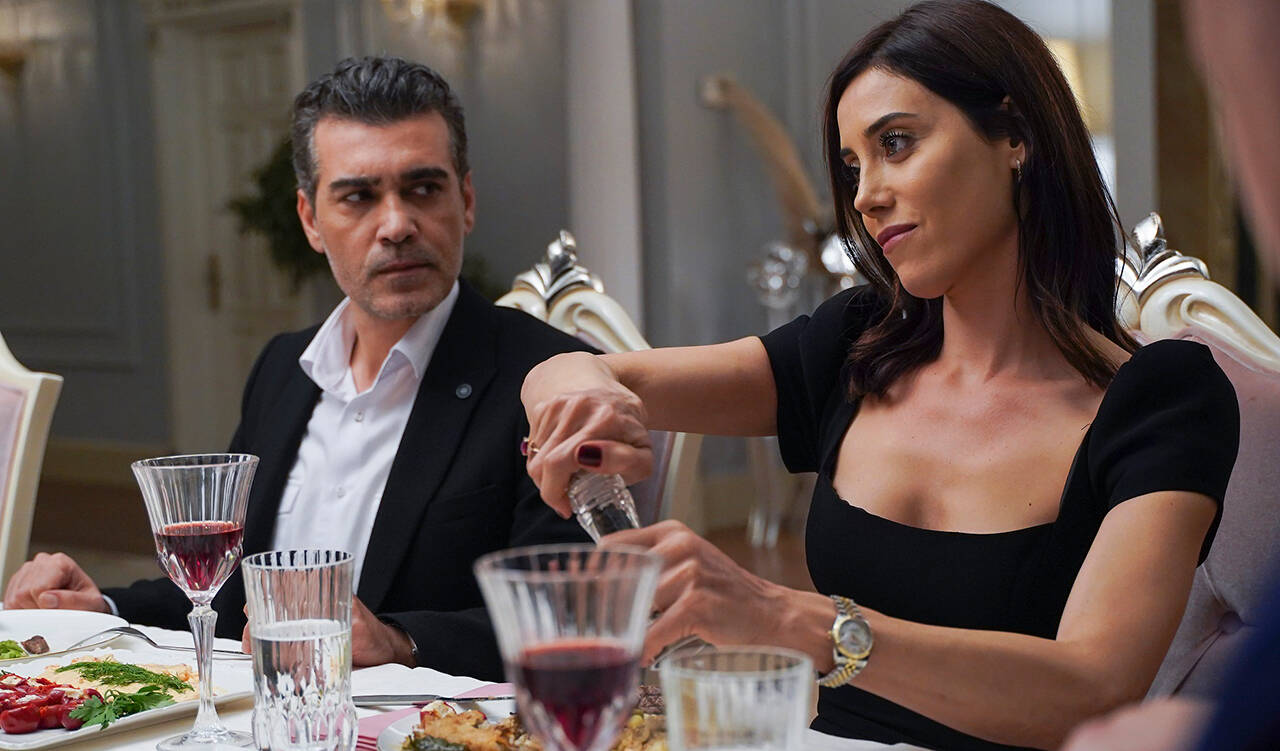 Whoever has the courage to hurt me, must have enough strength to bear the consequences.

The episode we're waiting for it's finally here. Unfortunately, it was different from the previous one. This was in different setup and all the casts also wear different outfits - except Aysa and Volkan. But it still the best.

This is what you missed on episode 6 of Sadakatsiz. Warning: there are spoilers ahead.

Aysa was supposed to pick up Ali at school, but she didn't show up, and now everyone looking for her. Aysa's car running out of gas so she starts walking with a jerrycan to buy gas. Passers-by catcalling her and she starts to hit people with jerry cans. She remembers that her parents died in a car accident. Before the accident people assumed they had an argument - because her father is cheating on her mother.

Selçuk wants Nil to get pregnancy control. Panics, Nil admits she's not pregnant. Angry, Selçuk leaves the house. Nil visits Aysa at her house. She returns the key of her apartment. But Aysa tells her that she can leaves there if she wants, but Nil refused. Instead, she will live with her friend. Aysa agrees and as a thanked she gives her money.

After Nil leaves, Mert calls Aysa. He tells her that Volkan just got an investor and that person is Haluk Bey! To thank him Aysa promise to meet him at the same hotel, the same room, and at the same time.

Haluk Bey hires a spy to follow Derin. He wants to know, who is his daughter's boyfriend. While following her, the spy lost her! Derin went to meets Volkan at his backyard office. She gives him a necklace - a necklace that he gave her before - but he refused. He takes the necklace and puts it on her neck then he kisses her. Feels happy, Derin tells him that she did not get an abortion. He promised her that he will find a way out and they will live a happy life.

Aysa picks up Volkan at the office. She didn't tell him anything. She only says it will be a surprise. On the road, Volkan heard that someone gave her a bouquet and he assumes it was from one of her patients but Aysa denied. With a smile, she replies the bouquet was from Mert. They finally arrived at their destination. It turned out that they were going to Haluk Bey's house. Volkan panics and asks her to leave, but Aysa refuses. Gönül Hanım and Haluk Bey welcomes them and take them around. While in the living room Aysa dropped Derin's photo.

My husband has been cheating on me with another woman - your daughter actually and now she's pregnant with his baby.

While having dinner Aysa wants a toast she says that there are so many things to celebrate, such as Halyuk Bey who recently invested in Volkan's project. Volkan and Derin are shocked and they stare at each other. After the drink, Aysa tells everyone that Volkan has been cheating on her and that woman is Derin. Everyone is shocked. Gönül Hanım asks Derin but she was too shocked to answer. Derin was about to leave the table, but Aysa then tells everyone that Derin is pregnant too and Volkan is the father of the child. Feel insulted, Derin hit Aysa. Aysa then leaves the house leaving them fighting.

Volkan chases Aysa and before she leaves she mentions Volkan's office that is going bankrupt. Shocked, Volkan asks where did she know that information she replies, it was Mert who tells her after they're sleeping together. Upon hearing that Volkan became very furious.

Mert goes to the hotel to meet with Aysa, but instead of Aysa, there was Bahar in the room. Bahar tells him that it was Aysa who contacted her. She doesn't believe that Mert is having an affair with Aysa! Crying she leaves the room.

Volkan and Derin went to Derin's apartment. She tells him that she hopes Aysa finds a new man and leaves Volkan for her. But Volkan looks unhappy hearing it. Seeing his reaction Derin is angry, but Volkan says it was not about Aysa, but it was about Ali. He says he doesn't want to lose him. Derin also asks Volkan why he did not mention that her Dad was the investor in his project, he replies he doesn't want her to misunderstand.

In the morning, Gönül Hanım visits Derin, she asks her what is her plan after got kick out by her father and why she's pregnant with someone's husband. Deri replies that she loves him that is why she's with him. While having a conversation, a post officer come and give her a divorce paper for Volkan. Derin then furious because no one knows Volkan lives there except her! Meanwhile, Gönül Hanım thinks the divorce is a good idea. Before her womb gets bigger she tells Derin to get married to Volkan.

Since the dinner, Volkan has been searching for Mert. He went to his house but no one there except Bahar. He then went to his office. There, he starts to punch him in the face and they're having a fight. Volkan does not believe the person he considered to be his own brother sleeping with his own wife and betrayed the honor of their brotherhood. Bahar then came and stop them from fighting

Volkan comes to Derin's apartment with bruises on his face. Derin panics, but Volkan tells her to calm. Derin then asks him if she tells Aysa where Derin lives, and he said no. She then gives Volkan the divorce paper and says it was probably a good idea for them to get a divorce. She tells him not to worry because her father will probably help him with some money. But Volkan disagrees! It was not money he worries about it was Ali. Volkan then leaves the house and went to Aysa.

Volkan comes angrily to Aysa and tells her that no one can separate him from Ali, but Aysa disagrees.

You have no idea what I'm capable of.

I appreciate all the production teams not to hold up this episode. The scene where Aysa admitted to Haluk Bey's family that Derin is Volkan's mistress was used as a trailer for the first episode. But as you might know, that scene was not in the first. Thanks to them we're not waiting too long to see that scene. Even tho it was in a different setup, it still makes our hearts beat fast - and laughing so hard.

We all admitted Cansu Dere is the right actress to portraying Aysa, but I think Caner Cindoruk did an amazing job as well - especially in this episode. It took talent to hate some character and I think not only the script but his acting as Volkan is very good. Those acts while having arguments with Aysa ... he manages to portray a character that is frustrated and angry.

Cansu Dere is an amazing actress to play alongside her is not an easy job. But Caner Cindoruk can balance her acting.

event_note November 26, 2020
Performer of the Week