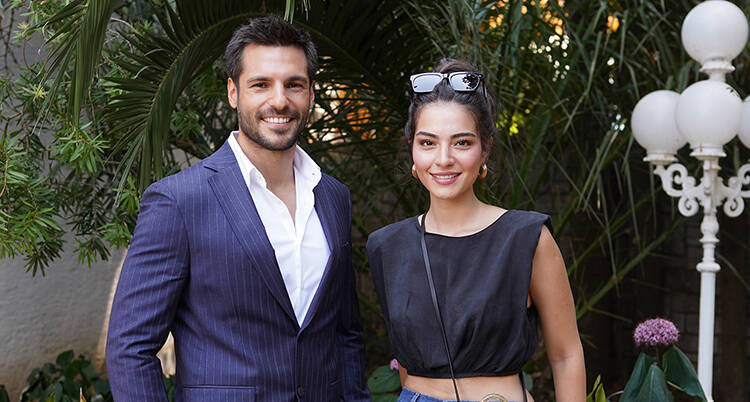 Earlier this year, Kanal D's "Yeni Hayat" created quite the storm on social media ahead of its slated premiere, which was in March.

Then, the COVID-19 pandemic happened and everything pretty much came to a standstill. When the show would eventually premiere became an unknown, at least until now.

As of July 24, the cast and crew returned to film the eagerly-awaited action-drama with a hint of romance, with strict COVID-19 preventive measures in place. Each cast and crew member was tested pre-filming and with everyone passing successfully, production kicked off.

Though Turkey is amongst one of the few countries to flatten the COVID-19 curve, the crew members of the production must have on masks whilst filming, and actors who are not filming scenes are also encouraged to have one on for their protection as well!

At least one episode was completely recorded pre-COVID, but with the quarantine period lasting a while, some scenes are likely to be re-filmed so as to negate any continuity issues!

Speaking on their exciting return to set, the show's lead actor Serkan Çayoğlu stated: "After quarantine, we are back on set and continue from where we left off. It makes me happy feeling like we never took a break and it made adapting so much easier.”

His co-star Melisa Aslı Pamuk concurred, stating: "After this difficult period, returning to work made me and my fellow team very happy. I hope it will be a good and successful season for all of us. I'm glad we were on the set again. "

Written by Elif Usman and directed by Başak Soysal and Cem Özüduru, "Yeni Hayat" (New Life) follows the chain of events that happen when two very different families cross their paths. The story is about the conflict of love and the family.

Everything starts with a business opportunity that comes across Captain Adem, who left the Special Forces. The door of a new life was opened to the happy little family, which Adem created with his wife Nevin and their little daughter Ece. All Adem has to do is to protect Yasemin, the young wife of Timur, a rich and powerful businessman. For Adem, a former member of the Special Forces, this job is almost child's play after all the dangerous operations he took part in. Nevin is happy that they will finally be at ease. With Adem's acceptance of the job offer, he and his family step into a completely different world where they are foreigners. Their new life is exciting and promising in the beginning... But soon this perfect picture turns out to be as deceptive as advertising photos.

Yasemin, a young woman who has gone to class by marrying a rich and strong man, seems to have a world that looks like a fairy tale from the outside which is actually a nightmare and the man who is thought to be the prince with a white horse is a kind of evil monster in fairy tales.

Yasemin is no different from a lone princess imprisoned in a tower. She has no choice but to make a devilish plan to save herself. While implementing her plan step by step, she plays her role in the most perfect way and waits patiently for the day of liberation. It would be a bad surprise for Yasemin to have Adem as her bodyguard. Adem is the biggest obstacle for the young woman to achieve her goal.

"Yeni Hayat" is expected to premiere last August on Kanal D in Turkey!