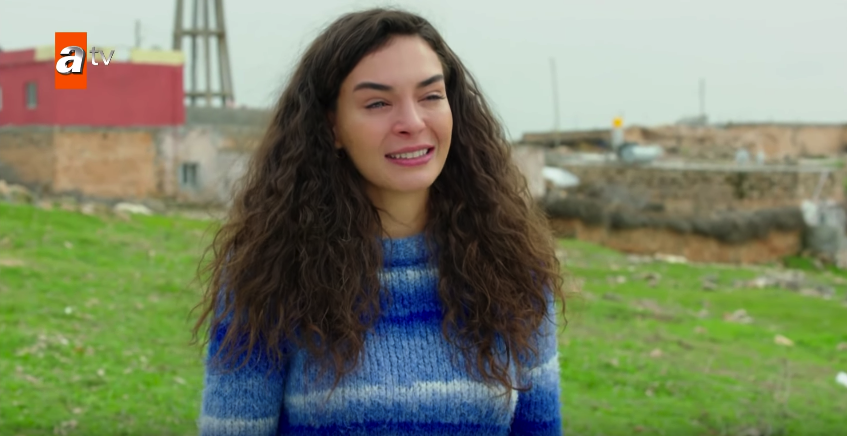 Yesterday, Hercai celebrated its first anniversary. Can you believe it? The show has managed to stay afloat through the ratings storm, mostly thanks to its solid core cast. In Friday's episode, we were treated to a fiercely exceptional performance by Ebru Şahin, who stars as Reyyan in the award-winning dizi. This particular episode was monumental in the progression of the story and who better to carry the episode than Ebru Şahin.

After carrying the weight of others and their problems on her shoulders in the last 35 episodes, Reyyan is finally confronted with her own harsh reality - the man (Hazar Şadoğlu) she has called "father" for all these years isn't actually her biological father. Dun. Dun. Dun. Though he has treated her with love and respect through the years, facing being lied to after everything she has had to overcome in the past year was just unfathomable.

Maybe if she was told earlier on that she was adopted, she would have been in a better place to deal with the news. Maybe if her father believed she would still love him unconditionally, matters wouldn't have gotten out of hand. Maybe, Maybe, Maybe, she pondered. In the interim, her evil cousin Yaren had been successful in making misery Reyyan's company, because shortly after breaking the news to the whole family – Miran included – Reyyan is inconsolable as she tries to grasps the implications of what she had just heard. "No consolation can take away the disappointment I've been through," she murmured.

It's the next day and the sun has risen and so has Reyyan but unfortunately for her, none of what happened the previous night was a dream. And even more reality was awaiting her outside the window of the hut she spent the night in, as Hazar and Miran – the two men who have written their part in her story – rested.

It is in the scene that came afterwards that Ebru came, saw, and conquered as she painted a poignant and heart-wrenching portrait of devastation resulting from deception. In between Reyyan's sobering time going back and forth with Hazar and Miran, Ebru delivers enough dramatic punch to leave an impact. We're pulled into her character's world, and whilst there, we're filled with so much pain and sadness as we wonder, how much more can a person take?

By the time she hits the floor, we were already left speechless but certainly more than ready to go to bat for her when the award season comes around.

Ultimately, though she has been doing pretty good in the episodes before 36, Ebru's impeccable performance here places her at the top of her game and makes it especially crazy to think she was playing supporting actress not too long ago.