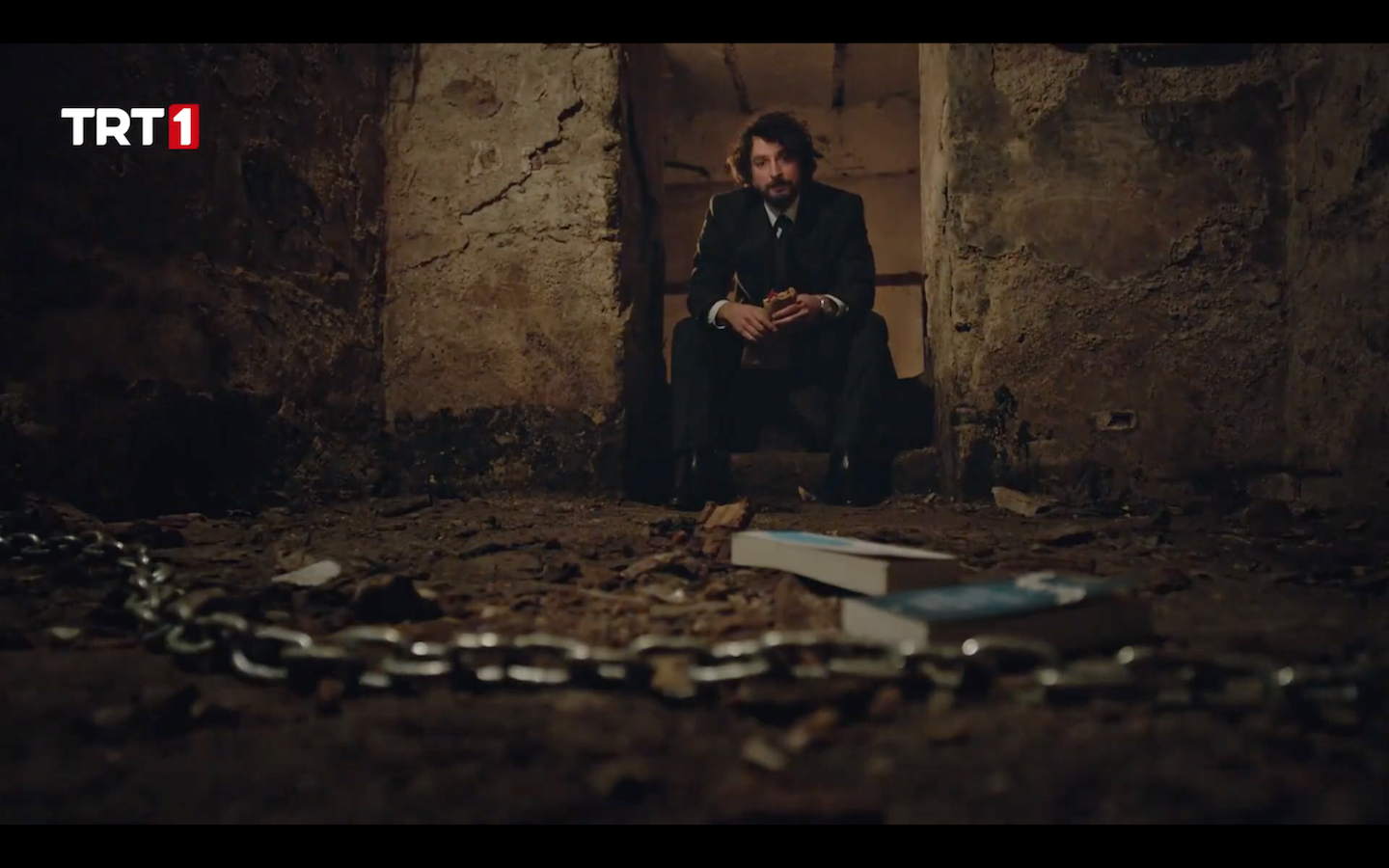 Spoilers from Episode 29 are included below.

Let’s begin with that final scene! It was terrifically terrifying (so much so that I jumped in fear!). Of course, after the episode ended, I was left with two key questions: Who pushed Esra? And, who is Han’s prisoner? The simple answers are that Han pushed Esra and that Esat is trapped in Han’s dungeon, but this would make Han’s character unredeemable. The writers have adeptly portrayed him thus far as such a multi-dimensional character that making him entirely ‘evil’ would transform the entire tenor of the show. Inci would surely not stay with him if he was guilty of imprisonment and assault.

Accordingly, I believe there is someone or something else in that dungeon. There were shades of Alfred Hitchcock’s Psycho in the scene where Han is throwing books at his prisoner. A part of me wonders if the wigs, the jewelry, and mannequins may provide an alter ego for him. Birkan Sokullu is thriving in his role as Han; with each passing episode, I am more stunned, amused and terrified of him. A truly unique and original character with so much depth and mystery. Bravo!

His physical altercation with the other patient at the psychiatrist’s office, and the patient’s creepy appearance outside of the apartment building suggests that this new patient may have been the one to push Esra. Of the new characters that have been introduced on this show, this newcomer has had the most contrived entrance as it is highly unusual and unbelievable that a person would go to such lengths after a single encounter; moreover, if this patient’s health is in such a dire situation, why would the psychiatrist schedule his meetings after Han’s, where they could easily have a chance encounter? Unfortunately, this psychiatrist does not have the elegant demeanor and intelligent humanity that Binnur Kaya has imbued in her role as a therapist in Kirmizi Oda. Although the camera has done multiple close ups on her, while she is in session with Han, she doesn’t seem to have command of the room; when Han physically threatened her patient, she didn’t seem composed enough to handle the situation, which given her profession, is a very foreseeable event. Perhaps, this is only the first psychiatrist that Han will visit? From these initial meetings, it seems the writers are either trying to portray the psychiatrist as incompetent or are trying to portray Han as so clever and crafty that he can outsmart and manipulate even the brightest health professionals. I expected Han’s interactions with a psychiatrist to be a true mental battle of wits a la Clarice and Hannibal Lector in Silence of the Lambs; perhaps those scenes are upcoming?

The plot points surrounding her story have been building momentum since we initially learned that she was harming herself. From the opening scene to the end of this episode, Neriman’s desperate plea for help, first at trying to escape, then at trying to explain to Safiye how the atmosphere of their house has created so much self-hate within her that if she were to act her feelings out on Safiye, Safiye would have died many times over. This compellingly heartbreaking and tragic story was masterfully executed, and although Ege is invested in his relationship with Neriman, he alone may not be able to give her the help that she needs. Of all of the siblings, Neriman, largely due to her youth, has the best chance of being able to heal if she can find and agree to seek medical help.

Well, Gulben has returned in part to her former, gentler self. Though still attired in Hasibe’s old clothes, she is no longer actively cruel and earnestly tried Inci’s meditation. Although it is unclear if the meditation helped her wake up with dry sheets, it did help her realize that she was very worried about Esat. If he is in the dungeon, I wonder how she will react. Moreover, it seems there may be an alliance brewing between Gulben and Esra: maybe searching for Esat will allow a friendship of sorts to blossom between them?

Esra must be commended as she has gone above and beyond the call of friendship. For Inci, she has not only forgiven Gulben for the mutilated doll incident, pushing her against a glass door, and putting a seemingly dead rat in her bed, but is also consistently putting up with Safiye’s cruel insults and Han’s creepy threats. If there is ever an award for ‘the best dizi friend’, Esra should definitely be among the nominees.

With such a talented and exceptionally capable cast and crew, this dizi has been able to masterfully and seamlessly interweave comedy, drama, mystery, romance and horror into the scenario, allowing audiences to be surprised by how events unfold during the episode, and left in suspense about what to expect next.